First summit of the season: ✅
Pulled into a random sno-park last week and spontaneously picked a trail off the map. Wrote about the experience on my blog. Adventure is out there!
This winter’s first snowfall in Seattle has me thinking back to this magical hike I took in BC right after the first snowfall of the season along the sea to sky highway. ❄️
Do you wanna build a snowman? ⛄️ 🎶
Shi sells shi shells down by the shi shore 🐚
At 26 miles RT, Spade Lake is about as remote as it gets in the Apline Lakes region. With pristine views like this, I’d say the trek was well worth the effort 🙌🏽 #2018top10 #ponytailsontrails
Otherwise known as “The-Mini Enchantments” ✨ #2018top10 #ponytailsontrails
Fave spot on the Oregon Coast 🌸 #2018top10 #ponytailsontrails
Guess the Gorge isn’t just for concerts! 🌻🌻🌻🌻🌻 #2018top10 #ponytailsontrails
750 feet ⬇️
Catching sunrise shadows at White Sands
Georgia O’Keefe’s inspiration 🧡
Sometimes you've just gotta turn your sleeping bag stuffsack into a makeshift backpack 🎒#multipurpose
Sometimes the best adventures come as a surprise! 😯 A beautiful surprise from a backpacking trip last summer in the Alpine Lakes region of Washington.
Every adventure calls for an adventure buddy! 🙌🏽🎒
Often times removing oneself from the surroundings of daily life is all that's necessary to realize how insignificant our daily "problems" are. Not only do the Painted Hills feel like a departure from daily life - they feel like a departure from this planet. 🌏 👽

When we arrived in New Mexico, one of the first things I noticed was the distinctive license plates. Rows of cars in the Dollar Rental Car lot were marked with bold teal and yellow plates that read “Land of Enchantment”. For the next five days, our Blue Nissan Rouge would be our ticket (and even our shelter on two freezing nights) to explore what that slogan is all about!

Our trip started in Albuquerque where we picked up groceries and immediately began our drive south. We spent the night in Roswell, home of the UFO debacle, and drove to Carlsbad Caverns the next morning.

One Empire State Building below the surface of the Earth, exploring Carlsbad Caverns felt like entering the underworld. To get down, you can either walk the natural entrance (~1.25 mi) into the cave, or take the elevator in the visitor center. Aside from the otherworldly structures and the mind-boggling scale of the caves, one of the most vivid memories I have of the experience was actually when our tour group stopped in an empty section, turned out all the lights and sat in silence. I never understood how dark darkness could be until then. And I never would have guessed that one of the most memorable sights I’d see would be seeing nothing at all.

As for the caves themselves, I’ll let the photos do the talking: 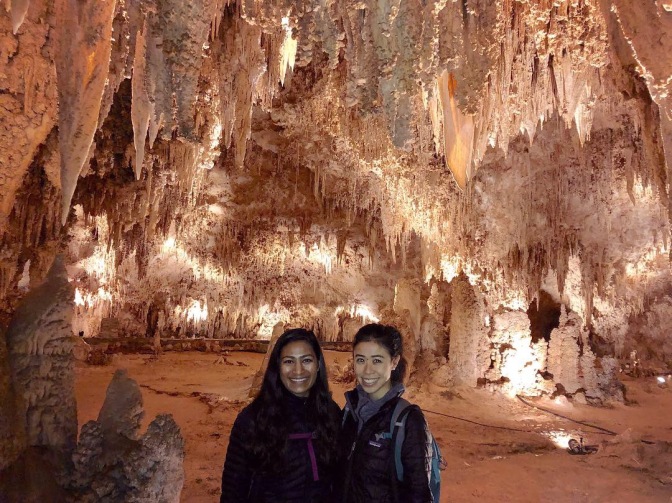 TIP: Reserve cave tour tickets online in advance. There’s plenty to see without a tour but there are some parts of the cave that are only accessible to ranger-guided tour groups.

We then drove to El Paso, Texas and stayed 1 mile from the Mexican border. As a Seattlite who has crossed the Canadian border many times, I was very curious to see what our nation’s Southern border is like. While we didn’t get to see border control itself, we observed the culture and listened to some really interesting podcasts on the history of El Paso & the border. We weren’t there long but did make it out to eat at a (read: VERY SPICY) Mexican restaurant. This was only the beginning of our chile-filled food explorations.

The next morning, we rose before the crack of dawn and drove to White Sands National Monument in hopes of catching one of their legendary sunrises but sadly discovered that the gates to the park are locked until 7 AM.

TIP: If you’re hoping to enjoy sunrise, snag one of the few backcountry campsites (walk-up only – no reservations). This is the only way to spend the night in the park to see the sunrise over the dunes.

When we finally made it in, we did the Alkalai Flats trail – the trail traversing the pristine white dunes that White Sands is famous for. Wayfinding was fairly easy with the tall red markers. Although the trail is only 5 miles with no total elevation change, it is still somewhat strenuous, as you are continuously ascending and descending sandy dunes.

It felt like we were on the moon and the morning sun created great shadows and textures that we enjoyed photographing. Due to our early arrival, we were the first ones on the trail which added a serene quality to our visit. Lately it feels increasingly rare to find solitude in popular parks so we took our time and basked in the tranquility. 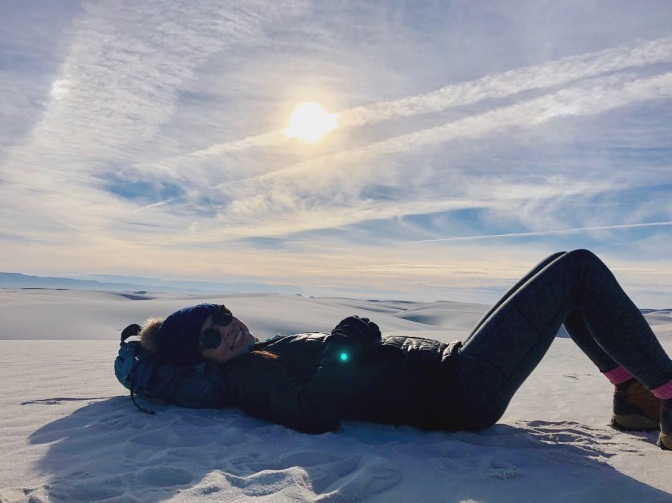 After finally completing the loop, we embarked on our long drive to Ghost Ranch, home of endless red rock, dinosaur fossils and Georgia O’Keefe’s inspiration. This was the part of the trip we’d decided to camp for. During November, Ghost Ranch has historically had lows around 35 degrees F. But of course, for the two nights that we were there, the forecast dropped to projected lows of 20 degrees at night.

When we arrived at the campground late at night, almost all of the 60+ sites were empty. The visitor center had closed and it was so cold outside that the campground bathrooms has been boarded up for the winter due to freezing pipes. In spite of our exhaustion, we pulled up at our assigned spot, pulled out our tent and began to unpack it. Then, both at once, we saw it: a single workman’s glove hidden under some bushes. Maybe it was the dark, perhaps it was the biting cold and small droplets of rain, perhaps it was the signs we saw to beware of cougars – heck, maybe it was our deliriousness from the early morning and long drive – but we both immediately knew we could NOT sleep there! I’d estimate it took around 90 seconds after seeing the glove to pack up and pull out of that site to set up elsewhere. The next morning we went back to our original campsite to see the glove in the daylight – we had a good laugh about it. 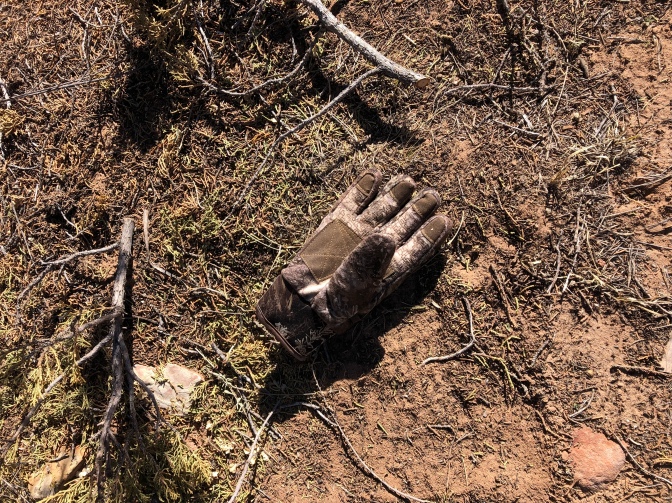 To shield ourselves from the cold, we decided to fold the backseats of the car down and sleep in the trunk while using the tent to hold our stuff. When we woke up the next morning to find that our gallon water jugs had frozen completely solid in the tent and the stakes were frozen into the ground, we knew we had made the right call! Still, we woke up to the insides of the car windows completely covered in frozen condensation and the need to Google “Are frozen contacts safe for use?”

We leisurely spent the next day cooking and hiking around. We stated the day slowly, enjoying the sweet relief of the sun with a warm camp breakfast – oatmeal and hot chocolate, followed by some reading (Wild – Cheryl Strayed). While the temperatures were still under freezing when we woke up, the sun’s rays could almost make you feel overheated. When we finally made our way over to the trails, we got to enjoy yet another hike to ourselves – the Kitchen Mesa Trail. Relative solitude, panoramic views and red rock – some scrambling required. The more we saw, the more it became obvious why Georgia O’Keefe was moved to create art.

After 2 days at Ghost Ranch we finally made our way back to civilization in Santa Fe. On the way, we stopped off in Taos to explore a hot springs. After several days of frigid temperatures, we looked forward to the sweet relief of a warm hotsprings. There are two major hot springs in the Taos area – Mamby Hot Springs and Black Rock Hotsprings. When we first arrived at Black Rock, we were greeted by a pack of large mountain goats standing their ground on the trail to the springs, forcing us to retreat and try our luck at Mamby. It proved challenging to get good information about the springs and the roads to them are confusing and unsigned. Our iPhones led us down a loooong, muddy, uneven, precarious dirt road full of steeps, bumps, dips and mud pits but the Nissan pulled through and eventually we made it to Mamby. The water was not as hot as expected but the warm water was refreshing and the bottom of the canyon was scenic.

When we arrived in Santa Fe, the first thing on our minds was food (I highly recommend Tomasita’s). We’d anecdotally heard that New Mexico is famous for their chile. What we didn’t know was that this was in reference to their pepper chile sauce, not some sort of bean stew chili (doh!). Their unique take on Mexican food was both fantastic painful at the same time. When we went to The Shed (also VERY highly recommended, pictured below) the next day, we learned our lesson (3rd restaurant’s the charm!) and asked for the chile sauce on the side. The locals are so into their chile that they even serve coffee with red chile mixed in for the brave of heart and sound of stomach. We weren’t feeling quite that adventurous this time – so I guess we saved something for next time we’re in the land of enchantment!

Our take on New Mexico: The temps were cold, the chile was hot and we can attest that the sights were indeed enchanting!

View all posts by ponytailsontrails

One thought on “New Mexico: Land of Enchantment”